Posted by Cre8ive on September 6, 2012 in Uncategorized | 0 comments

Today I played Day 3 of the SubPartouche main event. I had an up and down day, getting short on chips and peaking at 350k. When the night was finished I ended with 134k going into 4k/8k blinds. We are in the money though. The tournament started with 573 players and 57 made the money. There are 47 remaining. The blind levels increase to two hours from this point on.

Before the start of the tournament today, Patrick Partouche (the owner of the poker tour), announced that he is canceling the Partouche Poker Tour after this series. Obviously the Partouche Poker Tour became tarnished once they decided not honor the 5 million euro guarantee they put on their main event. Below is a video of the end of his speech which he completed in English. Also the aftermath, which begins with me calling him out about the 5 million guarantee. Peter Jetten recorded the video and jumps in the conversation as well. I was recording on my camera too but the footage isn’t as good. If you want to see the whole video PokerNews did a write up about it.

I have a lot more I could say about this whole ordeal but I will leave at it that for now. Wish me luck in the tournament! I’ve been wondering if Partouche will still pay me if I win it, haha.

Here is an interview I did with PokerNews over the summer at the WSOP in Vegas.
I’m heading into Day 3 of the Partouche Main Event in about an hour. I have 70k in chips with the blinds starting at 1200/2400. There are 119 players left and 57 make the money.
There was a lot of drama surrounding the release of the prize pool for this tournament. Partouche GUARANTEED it would be a 5million euro prize pool. They didn’t receive enough players to reach the guarantee, so the difference SHOULD HAVE been paid by the casino. The difference is about 750k euros. I will have to write more about it later…
Let me just say that things like this happen way too often in poker and it is ridiculous. Many players probably wouldn’t have traveled here to play if they knew this was going to happen. Cannes is an expensive city, Partouche takes a HUGE rake (4% uncapped in their cash games/their tournaments they are taking 10% and up to 15% in some of them), it isn’t cheap to travel to Europe if you don’t live there, and also PokerStars is having their WCOOP (World Championship Of Online Poker) series. I’m sure a lot of players would have skipped this tournament if they didn’t have a 5million guarantee. Partouche has denied that they ever “guaranteed” the prize pool and frantically have tried to delete all the evidence about it. Luckily a lot of poker players and people in the industry have saved the proof.
With that said, I have renamed the brand: SUBPartouche. I’m going to do my best in the tournament and hopefully I can make a deep run. I’ve had a blast playing a lot of poker lately. Follow my twitter for updates. 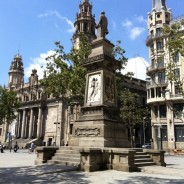 Yesterday I arrived in Barcelona, Spain for the European Poker Tour (EPT). I will be here for the duration of the series, which is about eight more days. Here is what my schedule looks like:

Most of the trip I will be traveling with Timothy ‘Tim0thee’ Adams. For some of the other stops our friend Sam ‘The Messiah’ Cohen will be with us too. Both excellent friends and more importantly, awesome people. Hopefully we can have some success playing poker and even more fun exploring Europe. I never forget how unbelievably lucky I am to have the opportunity I have, regardless of how the poker goes. Here’s a few snapshots from my first few days in Barcelona… 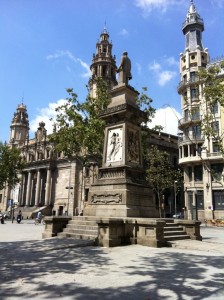 Walking around the city. 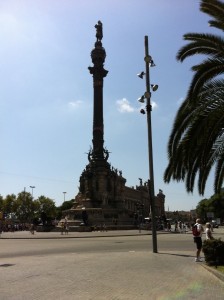 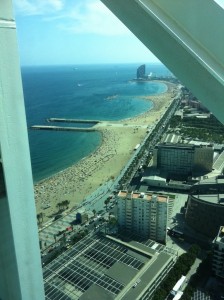 View from the top of Arts Hotel. The beach was packed due to the holiday “Assumption Day.” 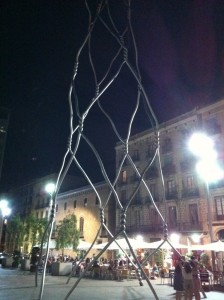 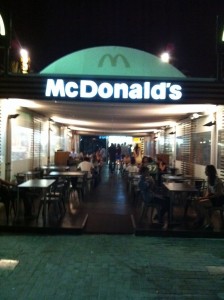 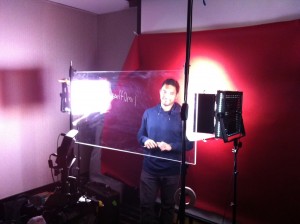 It’s the celebrity Tim0thee during an EPT feature! 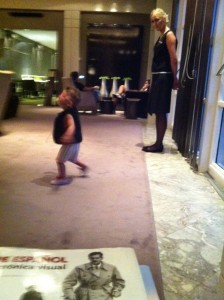 The picture does no justice. This baby was the most swagged out two year old I’ve ever seen. Pink glasses, pink t-shirt, black furry vest, a feminine mohawk, and the attitude to match. She was doing her thing. Salute. 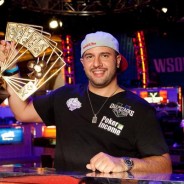 First I would like to give a few congratulations to some of my friends who won a World Series of Poker bracelet.

Michael Mizrachi, who doesn’t need any sort of introduction. Unbelievable poker mind, great friend, we also work together for DeepStacks, won the $50k Players Championship. He won the same tournament two years ago. What a stunning accomplishment. 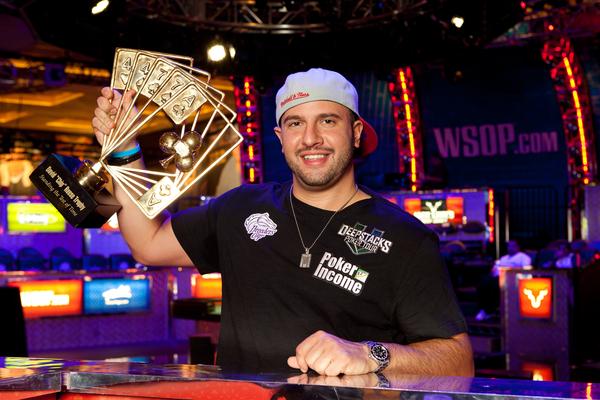 Timothy “Tim0thee” Adams, who is one of my best friends in the poker world. Unbelievable grinder, great ambassador for the game. I can’t say enough good things about him. Won the first ever 4-max NLH tournament at the WSOP – $2500 buyin. He also finished 7th in the 10k 6-max NLH.

Ronnie Bardah, another awesome guy in the poker world. I don’t know a single person who doesn’t like him or has a bad thing to say about him. He was waiting for this victory for a long time. Won the $2500 Limit tournament. Nick Jivkov, one of the first people I coached when I started private coaching years ago. I don’t take any credit for his bracelet win whatsoever haha. He’s been at it a while, working on his game, improving on his own. It was awesome to see him win his first bracelet. I have to visit him in Illinois soon to celebrate.

Congratulations to all of you guys! It was incredible to see so many people I personally knew win a WSOP bracelet. I was genuinely happy for each and every one of them. I’m sure there are a few more I could list but these are the people I know directly. It’s been an exciting WSOP to say the least.

I’ve had four cashes so far this year. I’m still in the best poker tournament in the world, the $10,000 WSOP Main Event. I started with 30,000 in chips and finished Day 1C with 30,675 chips. Not the exciting start I imagined, but it’s fine. This tournament is a marathon, not a sprint. I’ve had two deep runs in it in the past and I hope I can have another go at it this year. I have plenty of chips and am ready to play. The winner will receive $8.5 million dollars, but you have to make the Final 9 before you get the chance to play for that cash. Follow my updates on twitter. Wish me luck.

(Hilarious animation of Dock Ellis pitching a no hitter on LSD, with Dock Ellis narrating.)

I busted 45th out of 1604 players in the $1500 6max NLH. I had a little over 20bbs and lost a coinflip. I felt like I played that tournament well, for the most part and I survived as long as possible without many good spots. I played a couple tournaments since then as well as the $3k NLH 6max tournament. It started with 924 people and we are currently down to the last 141 people. 108 make the money. I’m really short on chips. My stack was up to 65k at 400/800 but I lost a big 80k pot 2nd nuts vs the nuts. I only have 14.4k going into 500/1k/100 ante. Hopefully I can pick up some chips tomorrow. I’m fairly certain the last four 6max tournaments, prior to this one, I made the money (4th in the 10k 6max, Isle 2k chop, 23rdish 6max WSOPE, 1500 WSOP 6max a few days ago.) Hopefully I can keep the streak alive, or the 5th time is the charm! Definitely going to do my best to win a bracelet this year. I don’t know if it is possible, but I won’t be the thing that stops me from winning one. Night.

Ellie Goulding – High for this (The Weeknd cover)

The $1500 PLO final table was crazy. There were a lot of pots played that I thought would have never happened. I was able to grind out a short stack and move my way up the money to finish in third place. Luckily in PLO there are no antes, which definitely helped the cause. There were 4.4 million chips in play and I never had over 380k. I am really pleased with my finish and my play from that tournament, but I also realize I have a lot to work on. That is what makes poker fun.

I received a tremendous amount of support throughout the last tournament run. It’s always amazing to see that. Thank you, I appreciate it. That’s really all I can say. There are more and more good, respectable people in poker, which is exactly what this industry needs.
Today was Day 1 of the $1500 NLH 6max tournament. I ended finishing 11th in chips with 137 players remaining. The tournament started with 1604 players and 162 made the money. We restart at 1pm and will probably play down to the final table. I’m ready to have another shot at a bracelet. There are a lot of good players left but I look forward to the competition. As usual, I will update how the tournament is going on twitter.

I’ve been in Las Vegas since last week. The WSOP is here once again and I am prepared to make a few deep runs in some of the events. So far I have played four tournaments: $1.5k NLH, $3k NLH/PLO Heads up, $5k Mix Max, and earlier today the $1.5k NLH Re-entry tournament. I was eliminated when my QQ lost to AQ all in preflop early on. I rebought and will give it another shot tomorrow. I feel like I have played fairly well but things haven’t gone my way yet. I’m not worried though. The WSOP just started and I have a lot of events to look forward to.

I can’t believe it is my seventh summer playing in the World Series of Poker. Time has gone by fast. Living in Vegas for the summer is interesting, to say the least. I learn more about the city every time I visit, but also feel like no matter how often I am here there are some things I can’t change. Life on the strip is much different than other aspects of Vegas. I try to not spend too much time around the strip but sometimes it is unavoidable.

I left off talking about how the WSOP wasn’t going my way. Well… before I could even publish this post I have made my first final table of the series. The event is the $1500 PLO tournament. I am currently 7th in chips, but really short. Here is the chip count for the final 9:

The blinds will be 6k/12k for another 20 minutes and then go to 8k/16k. I will need quite a bit of luck to take this down, but it’s PLO and anything can happen. It feels good to finally cash, let alone make a final table. I’m excited to play this one out. “Thank you” to the people who cheer me on in these tournaments. It is really overwhelming. I’m glad to know so many good people in the poker industry. We restart at 1pm tomorrow. Time to get some sleep. Follow my updates on twitter (@TristanCre8ive)